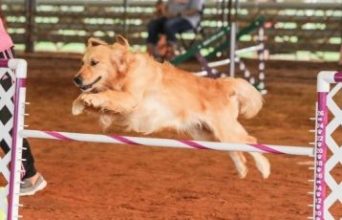 Bikini is our Skye X Trace daughter- from a frozen semen breeding that incorporates a long line of correct, beautiful and talented dogs. We have high hopes for this girl who was the only girl in the litter of three, all of whom went to show homes. Her brothers are also multi-titled already. She is smart, beautiful, and likes to play any game as long as she knows the rules, being super biddable and always willing. Bikini loves water, birds, training and most of all, being a partner. She’s got a sense of humor, and is a super good companion as she will play any game she is given a role to play in.

Bikini earned her CD with all placements, and all three Agility titles (NAJ, OAJ, AXJ) with placements too – mostly firsts!
Her CCA ratings were all very good and that was earned at the GRCA 2015 National show. She is truly a do-it-all kind of girl.
She is OFA Excellent, and has no breeder’s options on her eyes. 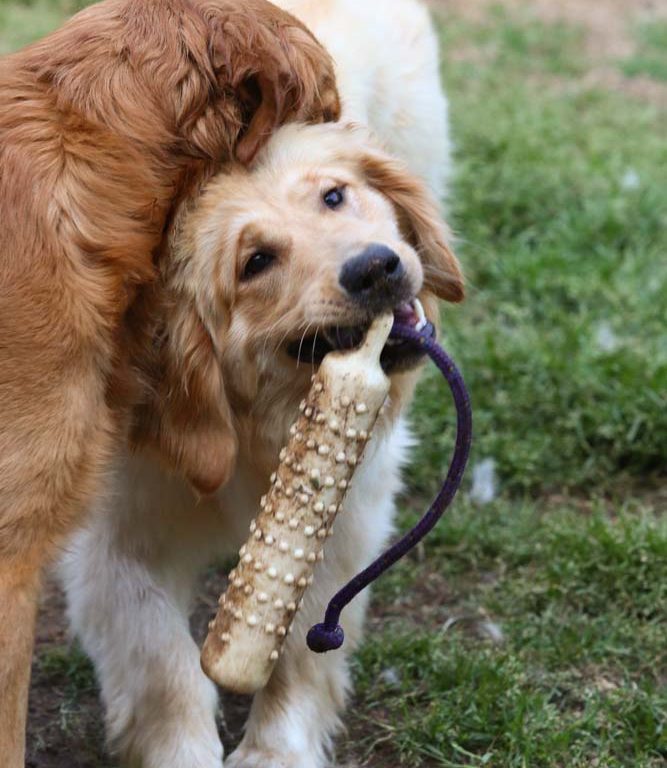 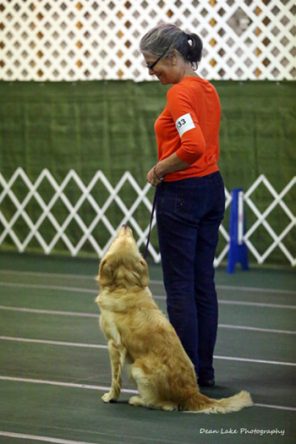 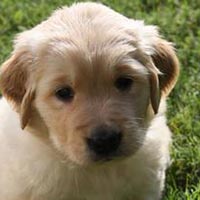 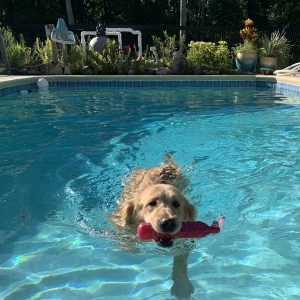 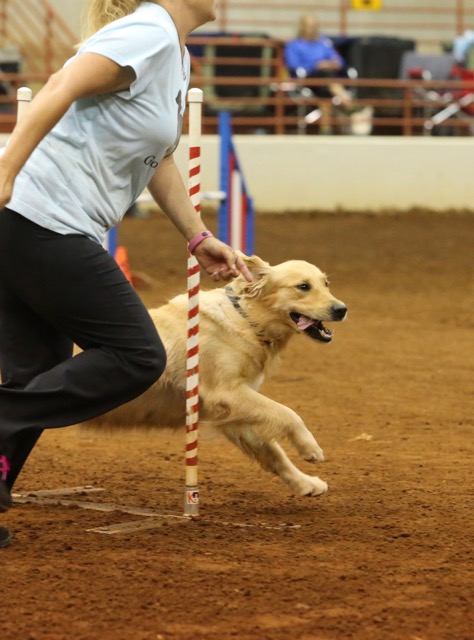 Molly Bloom is our Hudson daughter- she is out of CH Goldruls Keymand Performance CCA (Fergie) and we adore this precious girl.
Her name comes from that of a character in the novel ‘Ulysses’ by James Joyce. Molly Bloom in Joyce’s work is ten years celibate before beginning an affair. The story was meant to correspond to Homer’s ‘The Odyssey’- one of our favorites- and certainly Nash’s favorite of the early literature that he read. Molly Bloom is meant to be the” Penelope” of the tale, and while Penelope is thought of as eternally faithful, well, the character Molly Bloom is definitely not! With a litter theme of “YES”, what else could we call her? We have a sense of humor! Incidentally, if I still have you- the sentence from which our Molly Bloom’s registered name comes from is the longest non-punctuated sentence in modern literature and ends what is called Molly Bloom’s Soliloquy.

Molly Bloom is a precious, precious girl. She is funny, smart, and endearing. She’s friendly with everyone, man or beast, and she loves to cuddle up and watch TV.  Her Championship was earned with Best of Winners and Winners Bitch ribbons at specialty shows and she has had some huge wins as a Special. She has black, black pigment and complete dentition, and is OFA Good. 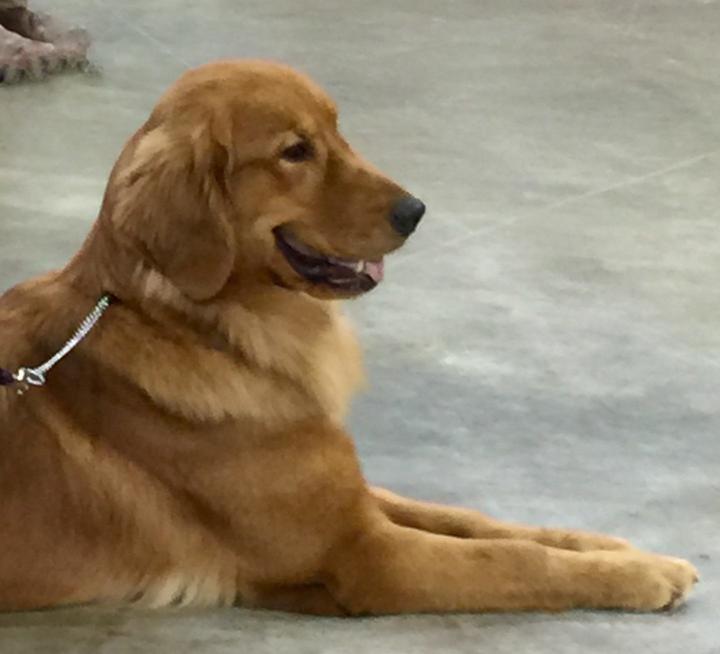 Katie loves her birds, and is a great swimmer. She’s also lovely- and while she started with field, she truly excels at obedience. Her coat is a deep beautiful dark gold and when the sun glints off it, there is nothing prettier. She’s such a precious dog, is very compliant, easy to teach, a happy dog, day in and day out. My sister Rhonda is her greatest fan and came up with her name. 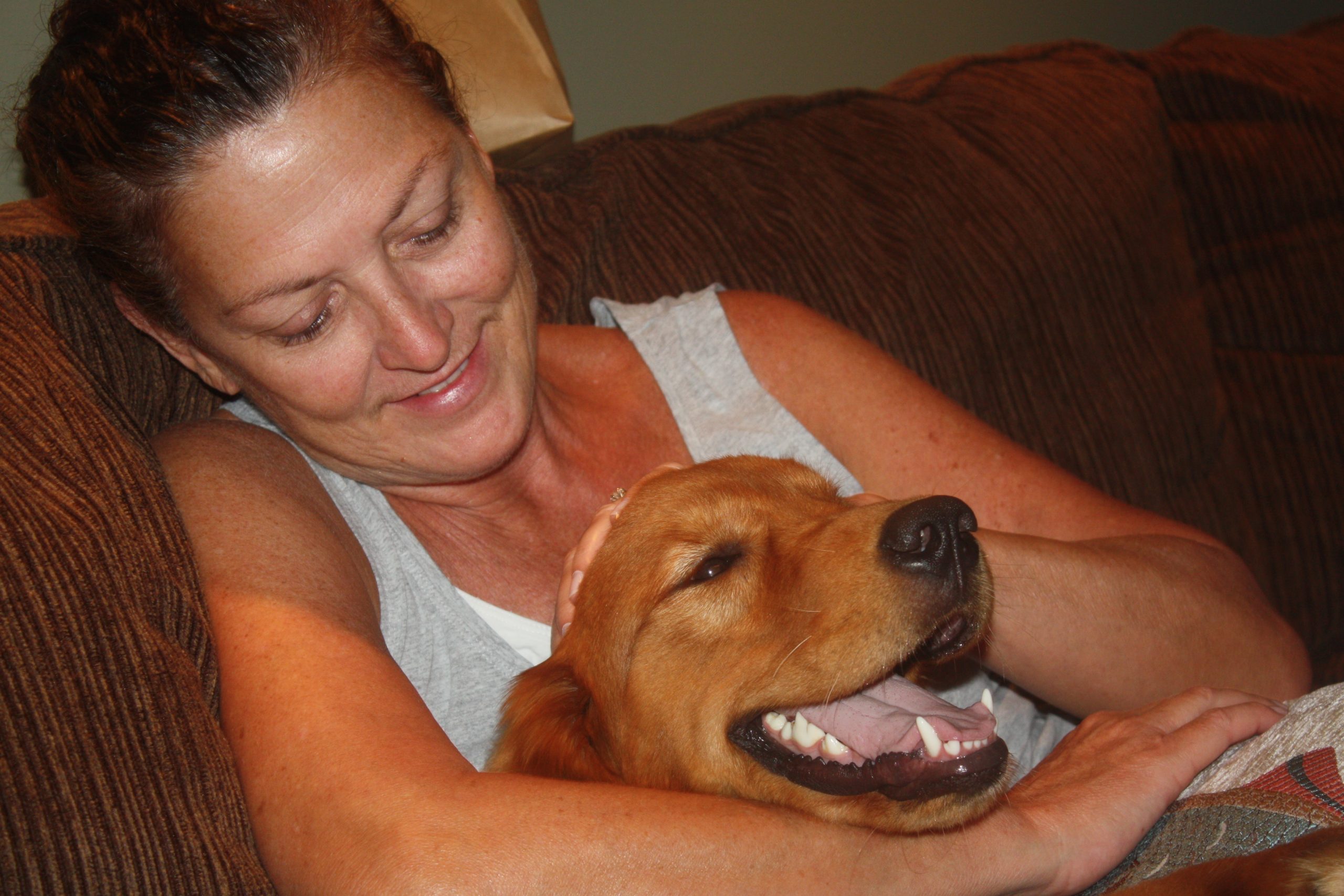 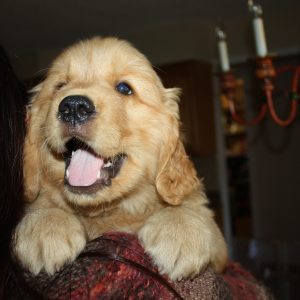 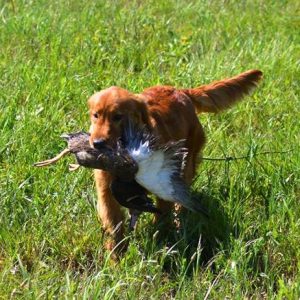 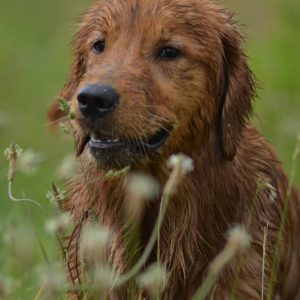 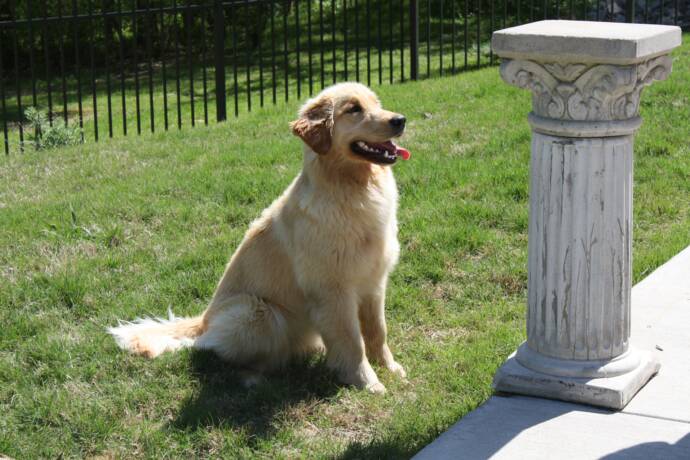 Trace is a girl I waited for since breeding Bess to Hunter (2003).
I wanted to keep a girl but kept Jake instead- so that girl I would’ve kept went to Lee Bryson with the understanding she would breed her to Trooper (Am/Can Ch Colabaugh’s Hi Speed Pursuit UD RE TD JH NA NAJ WCX SDHF OS) someday. That day came, and from that breeding we got precious Trace.

Trace is darling, her response to EVERYTHING is to sit and see if that gets her a treat. She’s swimming well, and is finding that the grooming table means special, alone time with the person who feeds her (and therefore is the center of her universe) and she now volunteers to be groomed if she sees a table to leap on. Trace is special- she really wants to please, and is a loving and easy dog to be with. She earned her GRCA Certificate of Conformation Assessment and her RN title was earned with 3 first places, She is OFA Excellent and has all her clearances.

Her pedigree is an older style, and she has many nice working dogs who also earned Championships behind her.

Trace is at home now with best friends Michelle and John, who once upon a time had a Trace daughter and now have Trace herself. She spends her days with them, trekking and swimming and all manner of activities.

A gypsy wind is blowing warm tonight – The sky is starlit and the time is right – And still you’re tellin’ me you have to go
Before you leave there’s something you should know …. 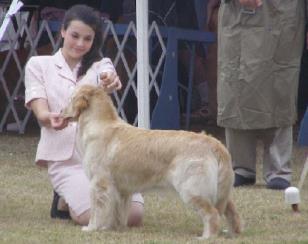 Gypsy’s exuberance for life is apparent every day- she loves to swim, retrieve, dust the tables with her tail, and go for rides.
She is an Outstanding Dam- which is the Golden Retriever Club of America’s title for bitches who have produced offspring who have excelled in competition, whether in performance or conformation events. Gypsy’s qualifying produce are:

Gypsy also produced health during her breeding career, which spanned three litters- one of which was a singleton. Out of the
6 puppies who were OFA evaluated, she produced 3 Excellents, 2 Goods and one Fair. She produced great acting talent as well (ha!)
Her puppies were used in the Borders Books Day-By-Day Calendar in 2010, and two sweet sleeping puppies from her second litter were featured in a greeting card. Two of her offspring (Edward and Lyla) were used in both print ads and packaging for a major dog product company, Petsafe. Hudson was featured in a Shaw wood flooring commercial. 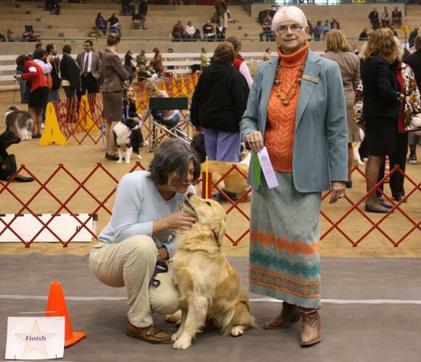 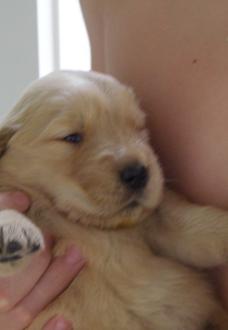 Lyla was so very beloved in our home, and later, to the Stark family. She never had a day begin without a smile, either from one of us or Vivian who sadly passed away the same month Lyla did. They were a team to the end. 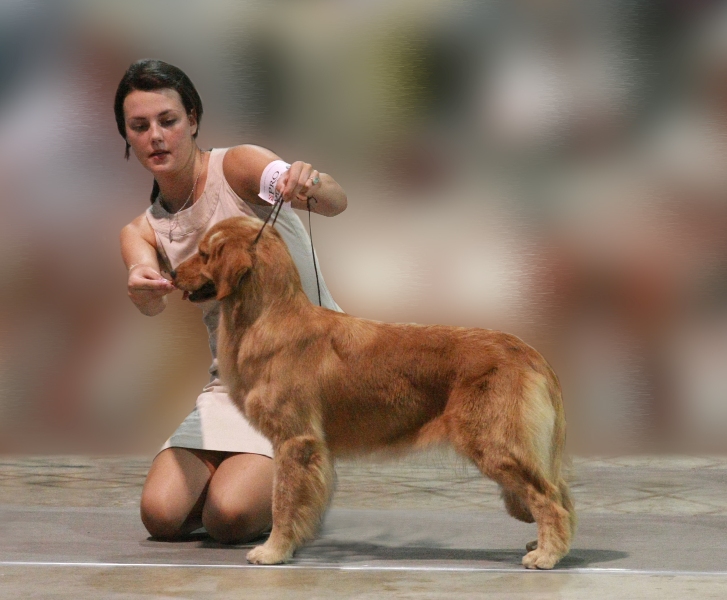 Jake is such a special boy- structurally, he is a correct, honest Golden Retriever. He has a great headpiece, a great personality, and is an easy keeper. He LOVES to work. At home, he swims laps all by himself, just to be doing something….yet he will be first in bed to cuddle and watch TV at a hotel.

Jake has been WCX test dog several times, and has earned the title several times as well.
Due to handler issues (mine) he actually earned his CD with three different people whose strides are all different, whose signals are all different, and who were not his person. He’s very resilient and will do what he is asked to do even if he doesn’t know you!
He can add nice conformation type to a working pedigree without losing any working desire. And he proves he can do it all by the many titles he has to his credit. 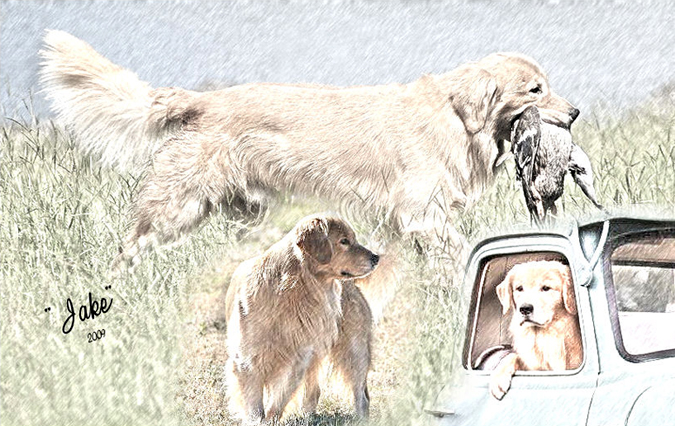 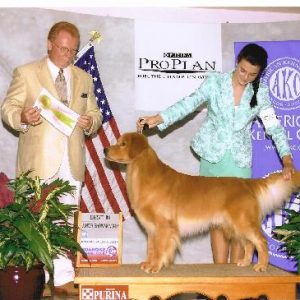 Bessie was an incredible dog. She was never the showiest dog in the ring, but she was a solid, consistent, correct, and honest Golden Retriever. She was a wonderful Junior Showmanship dog for five years. She helped Maxie qualify for Eukanuba and Westminster in 2006 with more than fifteen wins in the Open Intermediate class and was her Juniors dog in 2007 for a part of the year as well in Open Senior, when she qualified for both Eukanuba and Westminster again. She also worked as a therapy dog with Therapy Dogs of Georgia. She is our foundation bitch, having produced Champions, field titled dogs, obedience titled dogs and world travelers. She was the tattler at our house, and was the one to open the gate then not take a step out but call attention to the ones who did. Bess had a sense of humor! She swam and played until her last week, and then grew tired- she was 13 years, 9 months and 2 weeks old when she left us and the legacy of the ones who carried on her wonderful traits in their own offspring- Jake, Duster, and Gypsy- who between them have produced amazingly healthy and talented Golden Retrievers to stand in awe of.

Thank you, Bessie. We will miss you for always. 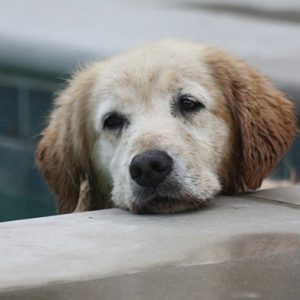 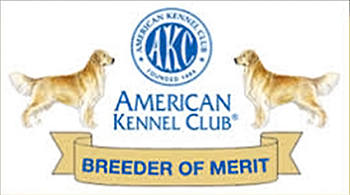